A Question (or problem) Regarding the Boundary Values 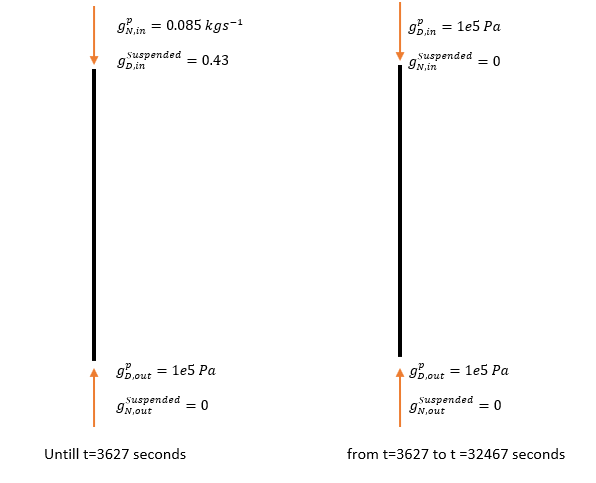 Injected biomass reduces due to attachment and decay of the bacteria. The rate is kattMOL(“Suspended”)+kdMOL(“Suspended”), in which katt and kd are constants for attachment and decay. When I run the model, I see that the suspended concentration is not 0.43 till 3627 seconds at the top boundary. For example, at time t=900, 1800, it is 0.407715. At t=3600, there is an accumulation of suspended concentration, and from x=47 cm to x=50 cm, the concentration is 0.43, which I do not expect.
I expect a similar behavior shown in the figure below: 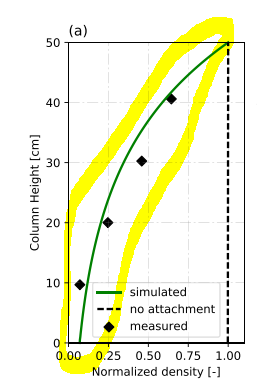 But instead, I got this type of distribution at t=3600 s: 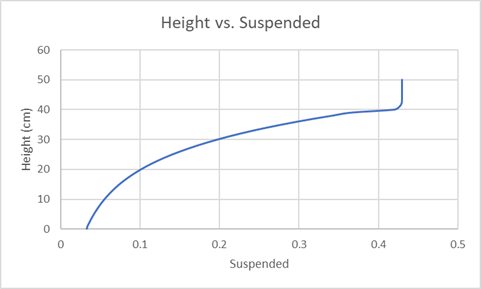 Unfortunately, I cannot get your point. Could you please clarify your problem a bit more?

Another issue is why there is an accumulation at the top? 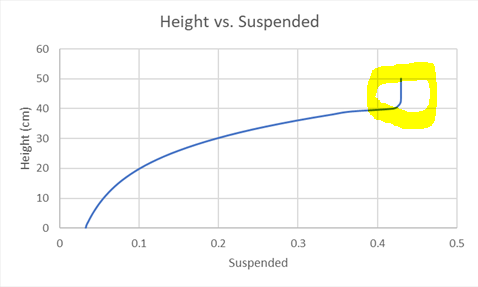 I think attachment and decay rates are high enough to prevent this accumulation.

Strictly speaking, the solute concentration at the boundary where a Dirichlet boundary condition is assigned shall be absolutely as the same as the specified value. In your case, the concentration of the substrate you called “suspended” at the top boundary shall be 0.43 mol/m3. As you observed, the suspended concentration at that point virtually doesn’t equal to the value you assigned. This numerical artefact prevails in solving reactive transport problems, resulting from the adoption of the operator splitting algorithm under which the transport equation is solved along with the boundary conditions over the computational domain followed by solving the reaction equation. To my knowledge, the common practice is that the solution of the reaction equation is free from the rigid constraint of the prescribed Dirichlet boundary conditions. To prevent the solution inaccuracy from such numerical artefact, it is suggested to adopt small time step size for the simulation. Once you reduces the time step size from 50s you have set to 1s, the suspended concentration will be closer to the value of 0.43 mol/m3.

In my opinion, there remain a lot of work being done in the algorithm level to enhance the solution accuracy.

Thank you for your help.

When I adjust the time step as 1s, the phreeqc calculations do not converge, but 2 seconds works well.

Thanks for the curveScaled parameter suggestion, I am now working on that.

I’ve got a question regarding the specific body force. Should I insert -1 or -9.81? In some of the project files, it is -1; in some of them, it is -9.81. Should we insert the direction or quantity of the gravitational acceleration?

Hi Emre,
use -9.81 as a value. Depending on the problem’s dimensions it could be

Thank you for the information.

Just for your information…

Last time I debugged your input files, the phreeqc calculation ran well with the time stepping of 1 s…

Anyhow, it is not bad with a time step size of 2s…

The issue raised in this post has been addressed via pull request #3781.