I have a reactive transport model were I run a simulation with a time steps size of 1e+3s for 1e+3 time steps to avoid oscillation at sharp gradients. My start time is 0, my end time will be 1e+6 s.

I woudl like to continue this simulation with another 500 timesteps with a size of 1e+4s.

So I run a 2nd simulation at a starting time of 1e+6s with 500 time steps of 1e+4s step size. I use the $RELOAD option in the *.pcs file to get may last output state as inital state for the new simulation. Fine.

The problem is the results output.

In the first run I have *.vtu files from 0 to 1000 for my 1000 time steps. I move them into a seperate folder before the 2nd simulation. I start the 2nd simulation but the *.vtu output files are started at zero again. I have files with ending 0-500 in total.

How do I combine the two sets of *.vtu output files? Does anybody has a script already developed?

In your case, there is severa things need to be done.

Looks good enough. So I consider step 1) can be done.

thanks for your infos and scripts. In fact I found another workaround. I just rename the *.vtk files as you already suggested (without changing the time information in the files itself), combine them with the ones of the previous run and then load all *.vtu files in Paraview instead of the *.pvd file.

In your case, there is severa things need to be done.

Looks good enough. So I consider step 1) can be done. 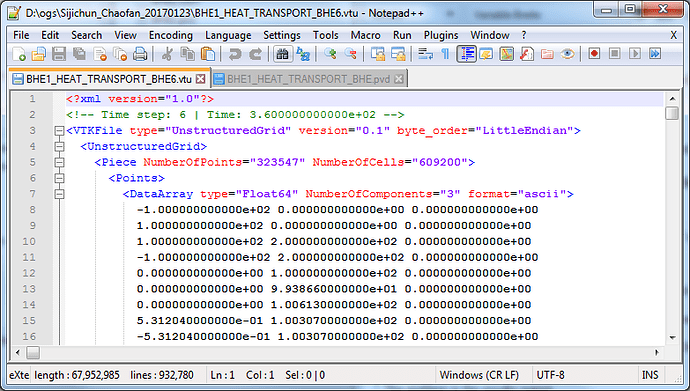