I have a model that should simulate 2d transport of an impulse load of a conservative hydraulic tracer through a 5m long (x) 1m wide (y) domain using the process ComponentTransport in ogs6. 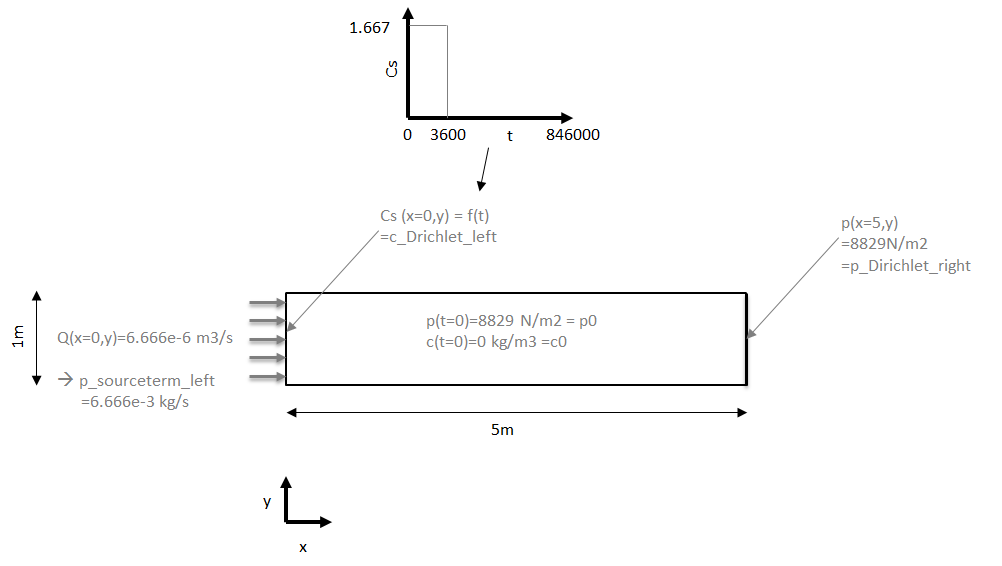 IC of the pressure p0 is 8829 N/m2 on the domain.
There is a Dirichlet BC for the pressure at the outflow p(x=5,y) of p_Dirichlet_right=8829N/m2.
The water influx (Q) on the left side is implemented as a nodal source term p_sourceterm_left=6.666e-3 kg/s. I assumed the source term as mass flux according to the documentation of ComponentTransport.
The tracer component (name=Cs), has an IC of c0=0 and a temporal depending BC at the left side c_Drichlet_left to simulate the impulse injection from t=0 to t=3600s.
Total simulation time is 10 days (846000s).
The project file is here.

1st problem:
The simulation finishes however, the darcy_velocity outputted does not seem to be realistic. 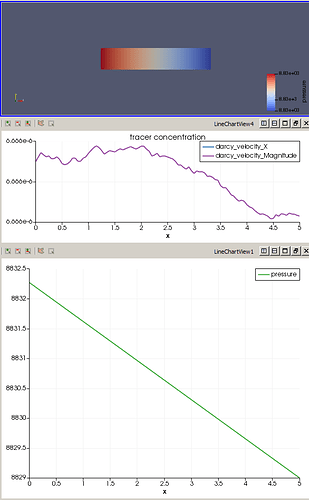 I have a comparable model in ogs5, which works well (reliable velocity_x).
Here, the water flow is defiend via a source term on the left side and a Dirichlet condition for the pressure at the right side.
The tracer component conditions are similar as in the ogs6 example. 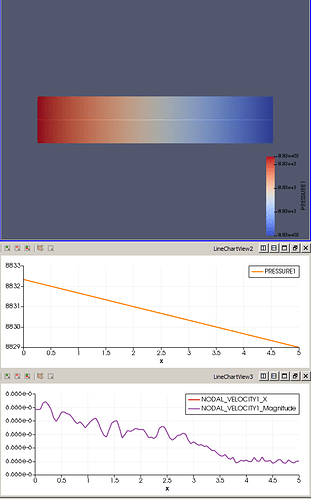 I already tried to implement the water mass influx as a Neumann BC (same value as for source term) in the ogs6 example, which yields the a similar darcy_velocity as in the ogs5 example. Fine.

My questions are:
Shouldn’t it work with defining the water influx as a nodal source term on the left boundary (ogs6)?
How is the nodal source term defined? I assumed it as mass per time (kg/s). However, this caused the unreliable darcy_velocity.
How is the neumann boundary condition defined? I assumed it as the derivative of the pressure, however, it seems to work well when I add the value of the water influx in kg/s. So, can you define mass fluxes using a Neumann BC?

I would appreciate your answer.

Definitions and mathematical formulation of the ComponenTransport process can be found here.

Link is not working, would you please share the link again?

It’s accessible via the our benchmark page, albeit somewhat hidden: Saturated Mass Transport

Note, that now there is also some new documentation for the component transport process: Component Transport Process

Unfortunately, there still might be some differences in the formulas. We are currently working to unify our documentation.